Little Thumb is a fairy tale written by Charles Perrault. Today it's almost unknown but it's actually a French version of Hansel and Gretel, the most popular fairy tale about children abandoned in the wood.

In this fairy tale we are dealing with a poor woodcutter, his wife, and their seven children. They are all boys, born in only a four years span, and the youngest is so tiny they call him Little Thumb (or Hop o' My Thumb). The youngest is also the smartest and all others are a mere decoration in the story with quite interesting dynamics. Let's go through the pictures by Oskar Herrfurth's postcards and summary first, then add some analysis. 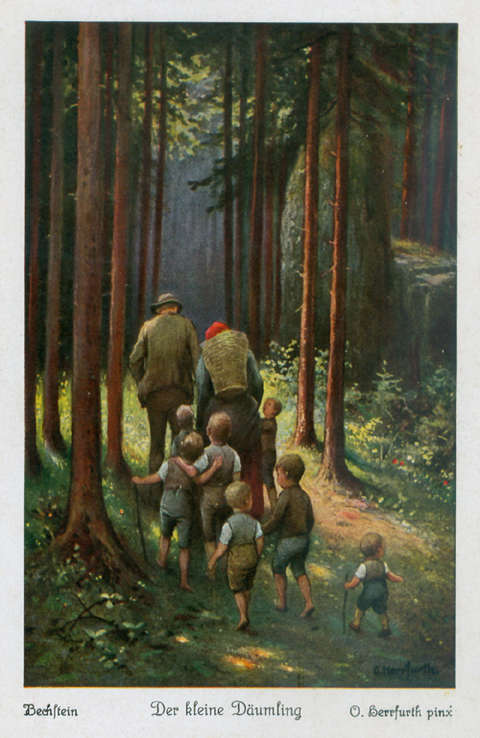 Th family was poor, everybody was hungry, dying of hunger was just a question of time. The father decided he'll lead his sons into the woods and leave them there. Little Thumb heard his plan and loaded his pockets with white pebbles. He marked the way, so the boys could return.

But father was merciless. He led the boys in the wood again. This time Little Thumb didn't have a chance to get the stones, so he tried to mark the way with bread crumbs. Unfortunately, birds ate them all and the boys were lost. 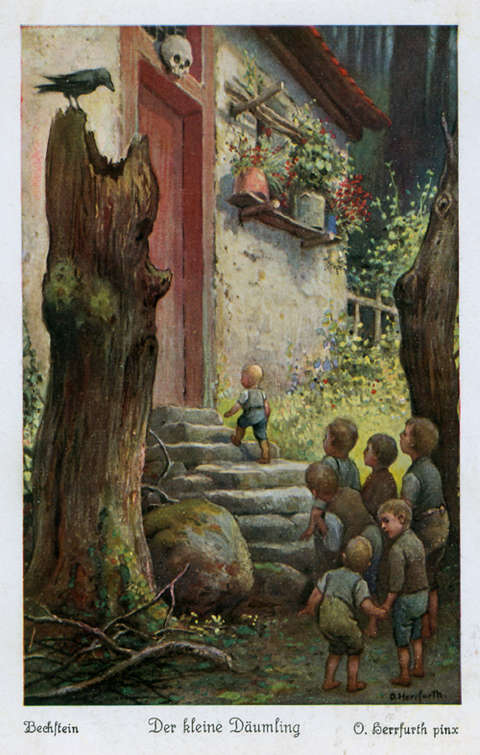 It was already getting dark when they found a house. A woman opened them but didn't want to invite the boys inside. Her husband was a man-eating ogre and he would ate them all for sure.

Boys insisted. They were hungry and tired and afraid of the beasts in the wood. They asked for some food and shelter to spend the night. They convinced her but the ogre soon returned and they hid in the kitchen. 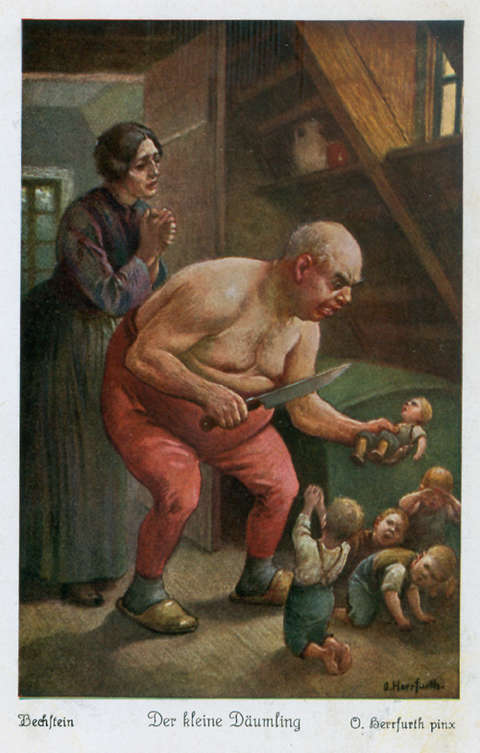 But the ogre smelled them and found them in no time. Eating them immediately or in the morning was the only question. After a while he agreed he'll eat them in the morning and they can sleep over in a spare bed in the children's room. The other bed was already full. His seven daughter, each one of them with a little crown on her head, were sleeping in it. Boys got caps and ogre left them.

But Little Thumb didn't believe the ogre would really wait until the morning. He switched the caps on boys' heads with crowns on girls' heads. Later ogre really returned and in the dark slaughters his daughters instead of the boys. Little Thumb woke up his brothers and they escaped.

In the morning the ogre realized his mistake and started a pursuit after the boys. Thanks to his seven-league boots he almost caught them. They hid right where he took a rest. 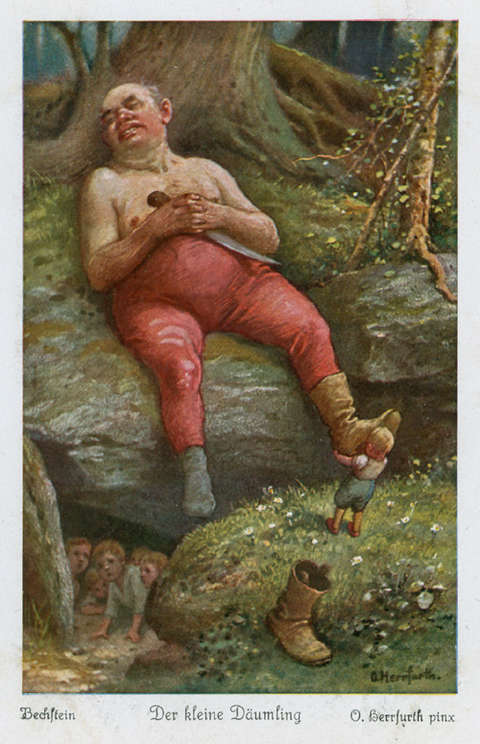 While he was napping, Little Thumb stole his seven-league boots. He lost and they won. 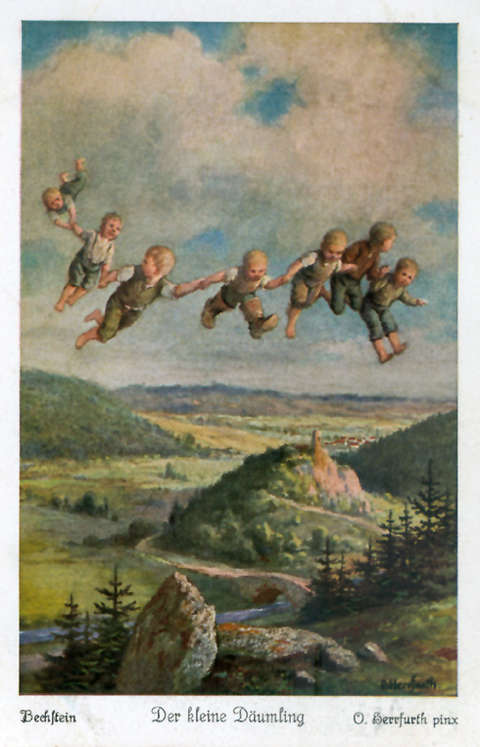 With magic boots the boys were unstoppable. Little Thumb got a job as a king's special messenger. 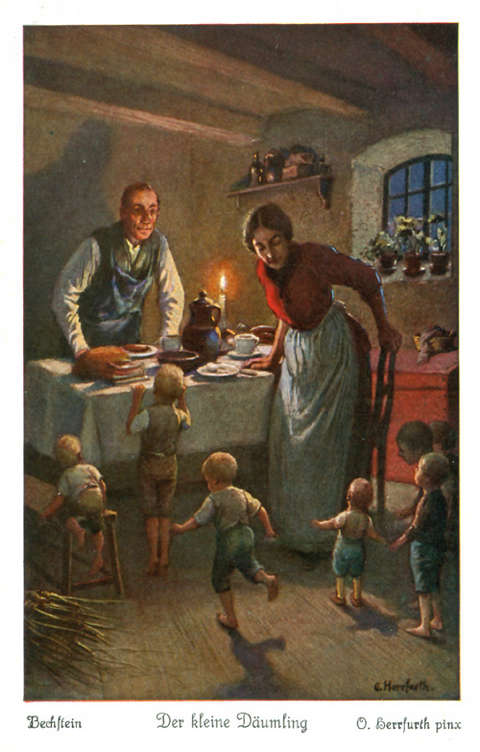 Boys returned home for the second time. This time with money and a promise of much better living for all. A happy ending.

Characters with their literary functions

There are only three dramatic characters, maybe four, if we count the king as a helper/provider but he's actually only an extension of newly achieved powers of Little Thumb.

Little Thumb is the protagonist of the story. His task is simple and typical for fairy tales. He needs to grow up. Growing up means he must take risks, he must face dangers, and he must face his own mistakes. In short - he must defeat his father as the ultimate power in his life.

He is able to stand against his dad for the first time when he lead his brothers (pure ballast in the story) back, but father in smart enough to prevent Little Thumb from picking white pebbles again. When he tries to mark the way with crumbs, it's obvious Little Thumb is not smart enough, at least at the very moment. He should know the crumbs won't last like the stones!

So he is put on a life risking danger. He is forced to choose between two bad choices - spending the night in the wood, hungry and surrounded by dangerous animals or try to sleep in the house belonging to a cannibal. He tries to hide in the ogre's house but he (and his older brothers) are found right after the ogre comes home. Little Thumb is smart enough to predict ogre's actions and sacrifices his daughters to save boys' lives.

This slaughtering may look cruel but it makes sense in a symbolic way. The ogre is obviously just another incarnation of Little Thumb's father who also tried to kill his own kids. While he didn't cut their throats, he led them in the wood where their deaths were inevitable as well.

Then the boy ran away. But running from so much stronger opponent is not the best option. Ogre's power is represented in his precious magic boots. Little Thumb used ogre's sense of security and steals the footwear so he can symbolically and literally steps into his father's boots.

This is clearly shown at return of the boys. Little Thumb took charge of the father's role as the protector and provider. He is grown-up now.

Through his perspective his sons became an obstacle and he must choose. His or their lives?

While he doesn't attack them directly, he does exactly that through the other pole of his antagonistic character. He becomes an ogre. Just like father was obsessed with hunger, the ogre craves for food. Ogre is also a father on his own and instead of seven boys he has seven girls - a perfect mirror to the situation in woodcutter's family. Ogre's wife is also incapable to protect the children just like woodcutter's. Ogre even tries to kill the boys twice, exactly like their dad did - first when he caught them, then when they were sleeping.

When the ogre realizes he was outsmarted, he doesn't surrender, just like the woodcutter didn't want to accept the boys when they returned home for the first time. The situation in the family didn't change. They were still without money. The situation for the ogre didn't change too. He still wanted to eat the boys.

Returning home or escaping from ogre's house was not enough. There must be some kind of confrontation - in this case with taking ogre's boots which were not just a tool for pursuing. They proved a valuable earning tool as well - the woodcutter's problem was solved.

At the end he was willing to accept the boys because the situation in the family was changed although his position of the provider (which he was obviously not qualified for anymore) was lost.

Mother is the third and least important character in the story about Little Thumb. She serves as the helper and protector. Her role is also represented in two literary characters - as the mother of the boys and the ogre's wife. In both cases she is capable to see the danger in their father (ogre), in both cases willing to help them with food and shelter, but also in both cases incapable to prevent her husband's intentions.

She serves her literary purpose to round up the story and make it more convincing. She also emphasizes the brutality of her husband (woodcutter and ogre) what adds to the tension in the fair tale. She is definitely part of the equation for the happy ending - a portrait of idyllic family life, but it's Little Thumb who must make a difference to solve the puzzle!

A few words about the number seven

Using number seven for the number of children was no coincidence. Charles Perrault simply tried to tell they had too many children. This was obviously a huge part of their problems. With a lousy job of their father there was no way he could support s large family. Number seven is almost always used in this context - just think about As pretty as seven (she was VERY beautiful), Seven ravens (a lot of boys, yet no daughter, and irresponsible father for a good measure), or Wolf and seven kids (a lot of kids again, a parent unable to protect them again), ...